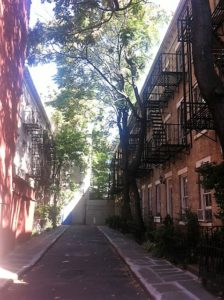 Patchin Place is a small nineteenth-century cul-de-sac in Manhattan, New York, in the heart of Greenwich Village. It has been home to a number of significant writers including e.e. cummings, Djuna Barnes, Louise Bryant and John Reed. It was also home to the British novelist John Cowper Powys and his partner Phyllis Playter from 1923 to 1931 and he wrote extensively about his life there. It was a crucial period in his writing career as he wrote his first major novel Wolf Solent there and began the move from itinerant lecturer crossing the whole of the United States for many years to becoming a full-time writer. It was important for his brother Llewelyn who lived there for a shorter time with his partner and subsequently his wife the editor and novelist Alyse Gregory. I have published an article on the Powyses and Patchin Place in the Powys Journal, XVIII, 2018, ‘Patchin Place: an ‘Alsatia for the hunted’.